Clip-Air, the multimodal project ongoing at Ecole Polytechnique Fédérale de Lausanne (EPFL), is exploring ways and means of changing the ‘traditional’ way planes are used, and the established business model as a consequence.

“Since the 60s, we’ve seen advances in aircraft engines and materials, but our approach to usage hasn’t shifted since the early days of aviation,” says project leader Claudio Leonardi.

A major source of inspiration for the Clip-Air team is the shipping container, invented in the 50s by the American Malcolm McLean to improve the efficiency of unloading goods from trucks and transferring them to ships.

“Globalisation of our society is in part due to the ease of transporting goods by container,” says Mr Leonardi.

The modularity and flexibility of the gamechanging container are two features Clip-Air has retained in its ‘capsule’, designed to “bring a degree of flexibility to aviation that is currently lacking.” 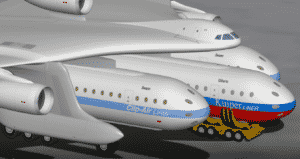 Another advantage of this system, the capsules could belong to different carriers … which of course would imply changing the business model as it stands! “And with the same plane we could even envisage different types of operation,” adds Mr Leonardi. “The idea is to fly just as much as we do today, but with fewer aircraft.”

He also highlights the important role airports are set to play in scenarios involving planes of the future – refuelling with liquid hydrogen, for instance. “We’re going to be increasingly attached to airports because, for this kind of energy to work, we’ll need piplines, space, and high security zones.”

This ‘relationship’ with airports will, however, depend on whether or not the design of liquid hydrogen (LH2) planes evolves in the future or remains ‘classic’, i.e. with interdependent or integrated (static and non-modular) tanks.

“Clip-Air won’t want pipelines under the runways because the tanks will be prepared in advance, outside the boundaries of the airport zone,” explains Mr Leonardi. “They’ll then be transported to the terminal, if possible in sync with the landing of planes.

“The classic  vision of LH2 and planes implies significant and complex levels of organisation at airports,” he adds. “But with mobile tanks we can bring flexibility and modularity to this model. The infrastructure should cost a lot less and deliver benefits from an energy perspective.”

Rather than jumbo jets with their huge price tags, Clip-Air has small planes and modular drones in its sights.