During the 20 April 2018 meeting of Futura-Mobility, on‘the transformation of business models for mobility’, Jean-Pierre Farandou, president of Keolis, presented his views on this topic – both for his company and mobility at large. 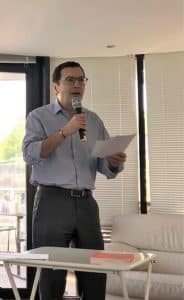 He began by clarifying what a business model and a business really mean: “The former is a sustainable economic system linking up different actors or partners and whereby the production costs of goods or services must, at some point, be recouped through revenue, through clients. Otherwise it’s not viable.

“A business is the coming together of a product, a service, and a market. A market is about clients, but also competitors since we are not alone in the modern-day economy. There are also competitors arriving that you haven’t see coming, plus they may well be on the other side of the world. Take China with its Marco Polo project, for example.”

Today, he said, two types of business model co-exist: “The ‘historic’ one, like that of Keolis”, whereby the wealth produced through operations must generate money to pay back the debt, the cost of the debt, etc., and that on which start-ups or ‘new economy’ companies are based.

“Uber, for instance, is an economic mystery. It loses 3.5 million dollars a year yet is worth 50 billion in shares. Spot the mistake! In the ‘old’ economy this doesn’t exist; but in the new one, yes. In fact it’s a kind of speculation; some people think that one day Uber will have to shift into the old economy.”

Mobility revolutions of the past, and present

Six parameters underpinned Mr Farandou’s reading of milestones in mobility over the centuries. “The various revolutions provide a technical solution for transporting people and/or goods. Energy is always involved, often with industrial capacity – in the broad sense – behind it. Then there are political aspirations (the common good), the impacts produced by the revolution in question, and the geopolitical drivers behind it all – at a given moment in time, certain countries exert more influence than others.”

If you look a a map of the French rail network in the C19 century “it’s amazing! In three decades even the smallest of villages have their train.”

The energy is coal, “steam is extremely efficient!” The industry is steel. The 3rd Republic sought to put down rail absolutely everywhere, which represented a leap into modernity with regards the exchange of people and goods: “it really got the French economy going. And during this era, the zone dominating the world was Europe.”

In the space of just a few years during les trente glorieuses [1945-1975], France built up a first-rate road network. “And unlike for rail, the vision for the roads was European.”

The private car, THE symbol of individual freedom, was made possible through mass production and limitless access to oil. This was the during the Cold War period with the US and USRR the two opposing bloc countries.

The revolution ongoing today with two dominant modes of transport: “mass transit (metro systems and commuter rail), the legacy of steam trains, and the car.”

But the car is now being seen as part of collective mobility since it is shared, electric (in line with the common good), and will be driverless one day, so less costly. In addition, soft mobility (cycling, walking) complete the picture. 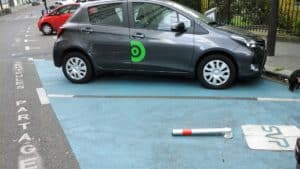 “In this case, big cities rather than governments are the driving forces behind this digital revolution,” maintains M. Farandou. “We are also see the emergence of companies more powerful than governemnts, like the GAFA [the big 4 of the tech industry: Google, Amazon, Facebook, and Apple] and BAT [the three giants in the Chinese digital economy: Baidu, Alibaba, and Tencent].”

These public and private spheres appear to be mixing together (consumer at the heart, but also as product). The revolution is on a global scale.

The zones of influence have shifted too: while the US is still in the game, Asia and BRIC countries (Brazil, Russia, India and China) are now also present. “Europe too, but we’re not in great shape,” pointed out Mr Farandou.

Obviously not an easy task! For the 4th mobility revolution, M. Farandou anticipates the mode will be a form of reversal between land and air. “Air space will be used for collective and local/close-to-home mobility [in cities].”

The land mode, especially when operating underground, with innovations like Hyperloop, could gain ground in the long-distance segment with speeds not far off those of planes. “Hyperloop could change global mobility, as did the TGV [train de grande vitesse, the now ‘iconic’ French high-speed train introduced in the 1980s] in France in heyday,” reckons Mr Farandou.

Could the latest mode even be ‘augmented man/woman’ – capable of walking 20km an hour? “Our images will also be travelling around and no longer our physical selves”: digitally enabled mobility.

Energy: we are heading towards the end of oïl in 2050. As regards ‘what’s next’, there are two main theories: that energy will become more or less free, abundant and non-polluting (see ‘Capsules intemporelles’, a collection of futuristic short stories about mobility (in French) co-authored by Futura-Mobility). “I don’t know which will be the dominant theory but one is good for the Keolis business model!” said Mr Farandou.

From a societal standpoint, the impacts of this 4th revolution are set to revolve around the robotisation of everyday life, with conséquences on employment (salaried status) and our life expectancy compared to ‘augmented man/woman’.

On a different level, the occupation of territories is likely to become (indeed it is already) a major issue, with 80% of the world’s population living in and around cities: “Do we continue extreme metropolisation with pockets of nothing in between? Or instead will we find an intelligent way to live in these vast urban territories?”

As for the areas of dominant influence, this is a source of concern: is a European model of society going to emerge between the ultra-liberal and individualist approach adopted by the US (reluctance to spend public money on the common good) on the one hand, and Chinese ‘democrature’ on the other?

China, with its sphere of influence, is the only country in the world to have established its roadmap for 2050.

The behemoth companies are also in the driving seat: “We’ve got the GAFA on the one side, the Chinese on the other. So it’s urgent we ‘make’ Europe, and make it fast! The two giants [US and China] are already here; will Europe end up the pygmy in the middle?”

If this scenario plays out, Keolis will be replaced by a US or Chinese company. “For Keolis to survive I need a strong Europe. And here issues over common good and our societal choices come into play.”

We are seeing a shift from products to services. Car manufacturers, for example, are realising that if they want to survive they must move up the value chain by proposing services tailor-made (they still have some way to go!). Investing in ride sharing companies is one way they are making this move.

The next (4th) mobility revolution will be about anticipating the needs of clients, thanks to artificial intelligence (AI). “We will reach a point when companies know what their clients need better than they do!” predicts Mr Farandou.

As for Keolis, the group has no intention of abandoning its core business. Already the world leader for automatic metro systems and tramways, a privileged position when it comes to relations with growing cities, the operator is embracing the 3rd revolution to stay in the race.

The group is already present in the sphere of robo-taxis, a mode that enables cost savings and is becoming competitive compared to public transport, despite not being subsidised.

The two focus activities are:

– self-driving vehicles: “with Valeo [a founding member of Futura-Mobility], we are the industrial shareholders of Navya, the French start-up specialising in driverless shuttles.” For Keolis, the method behind this move is to become an operator of future shuttle fleets;

– ride sharing: Keolis subsidiary LeCab operates in Paris, plus the group has a partnership with the US start-up Via, whose software optimises shared rides in real time.

In parallel, Keolis is doing some soul searching too. “Should we move into the air space or hydrogen in the next few years? Because if we wait too long, we won’t have sufficient clout to join the race. What technologies should we have in our hands tomorrow?”

Who dares wins? “Those who take their bets will be tomorrow’s winners; those who float around will disappear,” reckons Mr Farandou. “It’s a militant commitment; people must have access to clean mobility solutions. Also, I believe in the driving force of the ecosystem. And in a strong Europe  – an absolute must!” he concluded.