6 June 2017: together with the founding members and steering team, some 40 participants attended this half-day meeting of Futura-Mobility held on the theme: ‘imagining future mobility solutions to meet global energy challenges’.

To open, four guest speakers presented their experience and perspectives on energy:

“Earth is a spaceship travelling at 30km/second around the sun. This makes us all crew members – with a role and responsibility in the conduct of this vessel – not passengers.”

“Not a single gramme of energy has been transported from Earth to operate the electrical systems on the international space station,”  he pointed out. “For the past 19 years since the station was launched into orbit [1998], the systems have run solely on solar power.”

The number one challenge in astronautics is space transportation, i.e. launching into orbit and remaining there. It involves reaching 28,000km/hr in a few minutes, which takes a colossal amount of energy. “In just two minutes the power reaches 45 Gigawatts – the installed electric power for the whole of France.

“The biggest challenge is perfecting rocket propulsion,” summed up Mr Clervoy. “We are trying to make engines more reliable, safer, and re-usable.”

“We will go to Mars but just not right now. We’ve got the road map, know what needs to be done, but aren’t ready yet. It should be possible to land people on Mars from around 2040.”

“Worldwide, electrification is increasing at an unprecedented rate. But people tend to automatically think production. We mustn’t ignore the distribution side, too.”

China expects to have 11 million electric vehicles (EV) on the roads by 2025. France plans to install 7 million charging points by 2030. These figures point to lightning growth in demand for charging infrastructure, begging the obvious – are we going to have enough supply in the coming years?

-managing costs and peaks in demand, whereby the solution lies in having charging points/stations as close as possible to the network;

-standardisation and the interoperability of charging equipment;

-how to ensure consistency at wider scale. The importance of encouraging local systems for self-consumption without excluding them from the national grid.

Following in the wake of PlanetSolar, the first solar electric vessel ever to circumnavigate the globe (May 2012), the objectives of SolarStratos are to demonstrate that solar energy can fly mankind higher than is possible with fossil fuels; to promote renewable energies; and use technologies available today to prototype mobility solutions for tomorrow.

If plans go according to schedule, come 2019 the team should be ready to fly at altitudes of 25,000 metres and higher, and so challenge the flight record set by Bertrand Piccard in 2015 – 1,468km, the longest straight distance ever flown by a solar airplane in aviation history – “but with him on board!”

Over the long term, Mr Domjan believes there is huge potential to develop solar technology for industrial applications, surveillance drones in particular.

“Today we are facing economic and climate change problems. We ecologists want to demonstrate that following on from C20th adventures with fossil fuels, 21st century adventures with renewable energies are possible and just as important.”

First-generation biofuels are currently available at service stations. Either biodiesel or ethanol, they are produced from oil- and sugar-containing plants and cereals, then mixed with gasoline and diesel in variable proportions. Yet due to competition with the agro-alimentary sector, moves are underway to develop a next generation.

“The objective, set by the 2016 draft of the European directive (due to enter in force by 2020), is to gradually decrease the share of 1st  generation biofuels by 2030. The key message of this draft is the resolve to significantly incorporate 2nd generation biofuels into the existing fuel pool by 2030. And this willingness is vital, otherwise nobody is going to invest in their development.”

The 2nd generation will be produced from lignocellulose derived from agricultural and forestry waste. France is currently exploring two main conversion pathways – biochemical and thermochemical – through the two projects Futurol and BioTfueL.

Mr Viguie encouraged French industrials and politicians to act now or risk ‘missing the boat’. “It’s the decade of 2nd generation biofuels. I hope France will position itself in this market.  If not, others will.”

Round table: feedback on presentations & further points of interest

For airlines, the new horizon is bio jet fuel,” said Patrick Gandil, managing director of the French Civil Aviation Authority (DGAC). “The more we have biofuels, the less compensation we will have to pay. Unlike with the carbon offsetting approach, biofuels will enable us to reduce emissions generated by flying.”

He also highlighted and approved the supporting role of electricity in noise reduction for planes. “For us in aviation, electricity is also the key to silent flight.” 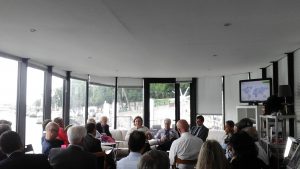 “Something we overlooked, but which is very interesting for transport, is hydrogen,” he added. “It’s possibly the energy source that presents the least problems, as well as being hugely difficult to manage. But this is what makes it even more interesting.”

In order to supply clean mobility in 2050, action must be taken now. “But in my opinion, we are already late,” said Fabio Ferrari, founder and CEO, Symbio FCell, adding: “The internet may not be the best technology for telephony but is ubiquitous because of the other things it can do, from carrying data to video. The same goes for hydrogen – it’s the internet of energy.”

“We didn’t talk about nuclear, which is a primary energy. And coming from supernova, it’s even older than the sun,” said Hélène Jacquot-Guimbal, managing director, IFSTTAR. “It annoys me a bit when people dismiss nuclear, which can be useful and we know how to manage.”

Her message here was clear: don’t reject energies that work only to fill in the gaps with non-renewable alternatives. Like, for example, Germany closing its nuclear plants and using lignite to fill the gaps. “Analyse the complete life cycle for the energy before rushing into it,” she added.

To wrap up, participants worked in groups to brainstorm on themes raised throughout the morning. They then shared their inspiration with the floor. 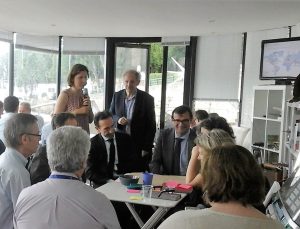 All the groups reaffirmed the multi-faceted challenge of preserving the planet, the environment, and humanity (health), while maintaining our current levels of mobility, because, mobility is a fundamental  freedom.

Remark: the technologies are ready or at tipping point. It’s now vital their combined use is effective.  So, the issue is not so much technology as behaviour related: we have to succeed in encouraging individuals to change their habits.

The insight, both valuable and thought provoking, covered social cultural issues, intermodality, storage solutions and zero waste, incentives and barriers to change. Innovative ideas included energy supply and future vehicles that are truly decarbonised as part of a global approach to life cycles. 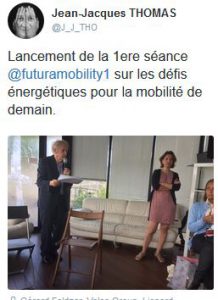 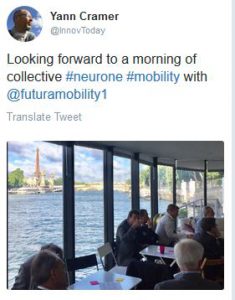 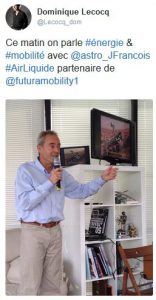 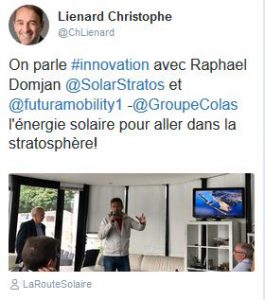 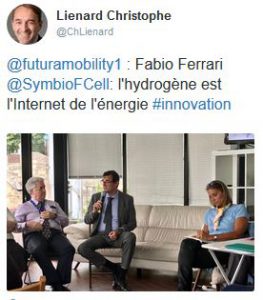 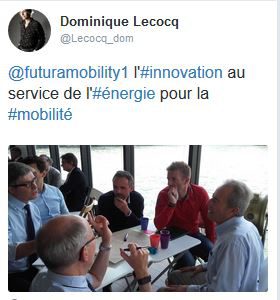