This session of Futura-Mobility focused on artificial intelligence (AI) and its role in tomorrow’s mobility. The field is rapidly becoming an indispensable go-to tool for transport systems because the ecosystem – data available in sufficient quantities, computing capacity, and algorithms – is now falling into place. Yet despite rapid progress, there are still many pressing questions and a need for an industry-level perspective and roadmap.

The programme combined presentations by external speakers with discussions and a brainstorming workshop. Throughout the day, Futura-Mobility remained a platform for its members to confront the challenges of tomorrow’s mobility, in a non-competitive environment, while obtaining a valuable cross-view of how the AI ‘revolution’ could affect their business segment and the transport sector at large.

Yves Caseau, president of the ICT commission at the French Academy of Technologies 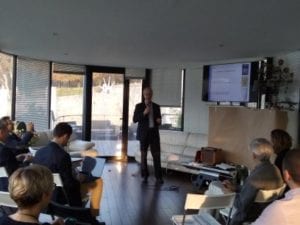 Mr Caseau (photo above) insisted on the fact that data alone has no value, nor do algorithms. It is the whole system – algorithms + data + iterations – that creates the value. “At the end of the day, doing AI is like a recipe”: the eggs and flour don’t have so much value when apart, but the cake does, and it’s very much this recipe, rather than data, that needs to be protected.

“Since 2012, AI has raced ahead with advanced technological developments, such as image recognition, every three months or so,” said Mr Caseau.

Indeed, the acceleration of AI for image recognition is so spectacular it has now overtaken human performance: as part of the 2015 ImageNet challenge, a competition in which teams compete to try and achieve the highest accuracy in image classification, Microsoft and Google announced they had beaten the human error benchmark by around 5%.

The expansion of AI includes companies applying solutions to verticals such as healthcare, advertising, and finance, as well as those developing AI as a general purpose technology (GPT). The number of both these types of AI business together increased nearly sixfold worldwide between 2011 and 2015, from around 70 to nearly 400. Meanwhile big players Google Amazon, Facebook, IBM, and Microsoft (the GAFIM) have invested billions of dollars in just a few years.

Mr Caseau describes the current status of AI, “an extensive toolbox”, as a set of methods and protocols, together with assembly, and encourages industry groups to explore the following five AI fields “sooner rather than later”:

Success with AI for an industrial company depends in part on creating the right conditions, which includes encouragement, for teams to succeed.

“Stop hindering co-workers from doing AI!” urged Mr Caseau. Also, since the technology is unpredictable, it is impossible to know in advance where it will lead. Consequently, expecting ROI for AI projects is pointless – “the top-down approach kills!” Another must, he insists, is allowing data sharing: “Remember, value lies in the recipe, not the ingredients / data!”

“It’s also important not to approach AI as was the case with IT, i.e. in terms of a project with deadlines, but as an ongoing activity,” he pointed out.

Developing a culture lab dedicated to AI, for testing many projects to see what happens, which ones work and which ones don’t, is another step in the right direction.  After all, making errors with machines is always easier than in real life situations – “it’s faster and easier to simply move on to the next thing.”

This ‘failure is part and parcel of the innovation process’ attitude falls in line with the thinking encountered by Futura-Mobility during its AI field trip to North America in May 2018. Patrick Cohendet, from HEC Montréal, told the think tank how the Mosaic creativity and innovation hub he founded was born out of a failed attempt to obtain public subsidy. And Mohamed Hage and Nicolas Delanos, from Lufa (urban) Farms, appeared comfortable about abandoning ideas that simply didn’t work out to simply move on to others.

Roxana Rugina (photo below), project manager at Impact IA, gave an overview of this foundation / ‘think and do tank created in June 2018 on the initiative of Microsoft. Its aim is ‘to foster collective and responsible thinking about AI issues through a systemic approach with members’, which include groups like Engie, Bouygues, Orange, Air France-KLM and SNCF, as well as Microsoft start-up partners. 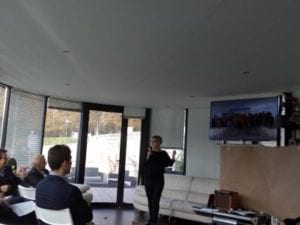 In November 2018, the foundation will publish a barometer of AI fears identified through a survey with the general public. Christophe Lienard, innovation director at Bouygues, suggested companies might subsequently use this barometer to conduct their own in-house survey of AI fears “to gain insight, to get their bearings.”

Pooling ideas – how could AI benefit the transport industry?

During this workshop, participants discussed AI use cases with potential for the transport sector. 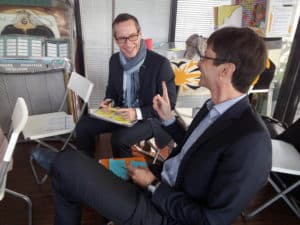 “As a manufacturer we have data on subcomponents but not operations” said Julien Cabot, chief digital architect, Alstom, adding that data on autonomous driving would be very welcome too: “we have a some of the data, a piece of the jigsaw, but not all.” 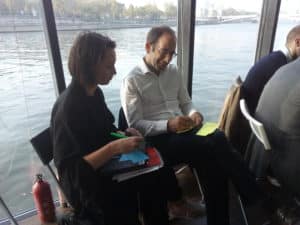 Arnaud Julien, innovation and digital director at Keolis, said AI would be useful for predictive maintenance of automatic metro systems. “The big challenge today is how to gather the data with consistency,” he said.

It was generally agreed that in many cases a lack of data was preventing progress in the above areas. Also, it became clear during this workshop, and indeed throughout the day, that ethical thinking is never far away when it comes to AI, especially for predictive purposes, e.g. for anticipating when people are going to leave a company for a new job?

One thing is for sure: in the future, the predictive power of AI is sure to be harnessed in the mobility field for customer-facing purposes.

Jean-Pierre Farandou, president of Keolis, pointed this out when speaking to Futura-Mobility in April 2018. He is convinced the 4th mobility revolution (after the 1st: train – coal – steel; 2nd: the private car – oil – mass production; and 3rd: mass transit & the car (but different) – electricity – digital) will be about anticipating the needs of clients, thanks to AI. “We will reach a point when companies know what their clients need better than they do!”