The attention economy was the theme of this Futura-Mobility meeting, held on 15 November 2019 in Paris.

Guests, speakers, and members together explored and questioned how this approach is developing in the field of transport – where it exploits the available time  of people on the move, whether travelling by plane, train, automobile or other modes.

The attention economy in transport has caused a considerable shake-up – for people/passengers as well as sector stakeholders, start-ups, established industrialists, and new entrants to the market. It raises questions over the value of transport itself, over the role of each and everyone…

The meeting kicked off with riveting introductions to the topic by the sociologist Dominique Boullier and designer Jean-Louis Frechin.

Dominique Boullier (photo below), sociologist, researcher at Sciences Po on media fragmentation and its impacts on attention, and author of the reference book La Sociologie du Numérique » aux éditions Armand Colin, puts the success of the private car – and the difficulty of breaking free from it – down to the notion of habitacle, “which attracts us and creates a sense of attachment in us to the car.” 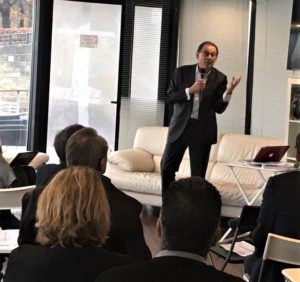 He draws a parallel based on the French verb habiter (to live in, inhabit), which becomes un habitat (a habitat) to describe housing, un habit (garment) when referring to clothes, un habitacle (a habitacle) for a car interior. Living our natural and a fortiori technical environments is “a powerful anthropological principle that creates senses of security and comfort.” 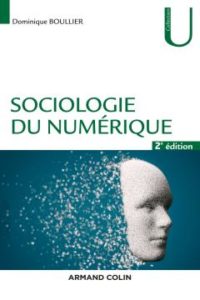 The notion of time is crucial. “It takes us time to wear in new clothes, to make them our own; likewise making a house into a new home.” This notion, even if difficult to programme, he believes can be accelerated by design: “through small signs and details lodged in design, it is possible to make a connection with your technical surroundings. This quality of the experience is extremely important.”

Indeed, Mr Frechin believes “a product has good value when it can be exchanged between a producer and a user who plays around with, diverts, and, ultimately, likes the objects he or she uses.”

M. Boullier expands his thinking on ‘inhabiting’ into the digital realm. Just as for houses, clothes, or vehicle interiors, the digital network must also provide for the envelope in which we evolve: l’habitèle – a notion he explores in his next book, published later in 2020. So, in his view, “if we want to consider matters of mobility , we have to take into account both the habitacle and l’habitèle.”

This approach goes beyond thinking the network in solely technical terms! Most of us today don’t live the digital network; we could even go so far as to say it is rather the network itself that invades us, by, for instance, providing notifications beyond our control. “L’habitèle is a network that suits us, that takes us, transforms us and over which we also exert an influence…. It’s about applications that provide us with services without being invasive, that help us live better, that do us good.”

In all areas, be they housing, vehicles, or the digital network, we have played and continue to play a part in real-life “systemic abuse”. Take the housing and uninhabitable districts of the 1950s and 60s in France, for instance, or megacities like Mexico, Lagos, Bombay or Cairo.

The car “is a special case because there is an overemphasis on it ‘being king’, a form of anthropological alienation, while, at the same time, a powerful sense of attachment – induced by the extreme comfort of this habitacle.” To dispense with the private car, “we need to work on reconstituting this envelope, this personal bubble, elsewhere than in the private car.”

Yet this expertise is very much the domain of traditional transport industrials – who are shifting towards mobility then digital – rather than the specialists in data connectivity now starting to do mobility.

Business segments aside, Mr Frechin even detects opposition between US and European design cultures. “The Americans […] have told us that ‘at the end of the day, the product isn’t important – for instance, we don’t care about the trains and planes in mobility – what counts is the experience, in other words, the sum of the contact points and stories channelled, not by a company any more, but by a brand’. It’s like music without instruments or musicians, where the only promise is the happiness of the music listened to. But can we make music without instruments, without musicians, without composition?”

The digital overemphasis presented by Mr Boullier is obvious. “We are witnessing the widespread extension of an information system for capturing your attention, but only and massively for advertising purposes. Through this, other services are provided, but they make money by carrying advertising. We have made a cult out of  free services… for advertising”. The overemphasis, therefore, is about capturing attention at any cost, everywhere, and all the time.

For Mr Frechin, this overemphasis is explained by looking back over the history of digital. When the personal computer developed in the 1980s, a lot of effort and even ‘joy’ – the word used at the time – was spent on ensuring users could handle these machines by means of simple and ‘friendly’ graphic interfaces, without having to be computer literate. “There was much humanity in this approach,” he asserts.

The arrival of the web and its corollary, free services, has upended the notion of attention. “In a space where hyper-solicitation is the norm, where billions of individuals are exposed to no end of services, the challenge is capturing this scarcity of attention.”

This issue of the web, he even believes, is the cause of a design schism between Europe and the US, even though design was invented in Europe. “Comfort no longer sufficed, it was necessary to go further to block people. A kind of design rewriting with ‘styling’ ideas: to rapidly revamp the look of products so that the style purchased the previous year is downgraded.” Indeed, Mr Frechin is critical of “post-war American design that theorised planned obsolescence.” Brooke Stevens, who co-founded the Industrial Designers Society of America in 1944, declared that we have to “help products die quicker.”

The prestigious Stanford University in California set up its Persuasive Technology Lab, which studies captology – “the art of catching fish with very little bait by claiming this ability to contain people in a defined space is wonderful – because we can teach them to take better care of themselves, to learn better, etc.” It concerns conditioning theories – not far removed from the nudge. “We are shifting from the connection with a product that renders a service to a product there to enslave,” laments Mr Frechin.

According to Mr Boullier, “it’s all the more problematic […] when we know the network is riddled with security leaks. We put people who want to live this network in a position whereby, on the one hand, they are invaded, while on the other, their data is collected without any security. We are going to have to be able to guarantee this security; nobody would accept anything less in their own home!” This would also imply a kind of digital decoupling: “we don’t live the platforms, we stay with them and end up being caught up by them.” 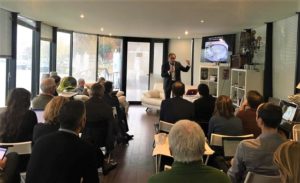 Another issue: “digital architectures have also been depoliticised because we don’t know who decides: for whom? What?”

All the same, Mr Boullier points out that this isn’t the only model. The local social link is also a means of capturing data, like the local councillor visiting a Sunday market, or conversations in the neighbourhood coffee shop. Sharing, with its strong collaborative nature, is another model – wikicity or openstreetmap, for instance. In his view, it would be good to also allow these other connectivity models to exist and integrate them into urban public policy.

Giving instead of capturing attention – a European model?

Mr Frechin is strongly in favour of asserting our European specificity: “in a regatta, if everyone is lined up one behind the other, there’s no chance of winning if you’re at the back!” In short, using tools created by others will lead us nowhere in terms of innovation.

In this case, the notion of confidence built up between the user and company is crucial. Take air travel, for example: “when you fly with Ryanair you expect a different kind of service from Air France.” For Mr Frechin, the key to attention is therefore seeking “a deep and genuine connection between the company, the brand, and the people using it.”

The design of the Corail train [for passenger rail in France, first introduced in 1975] or the cockpit of the A320 are textbook cases, illustrating how significant attention is paid to the end users, rather than captured from them: passengers on the one hand, through genuine observations and listening to the initial users, and pilots on the other, with keen awareness of the ergonomy and behaviour patterns induced by the new interfaces.

In contrast, Mr Frechin believes car builders have gone against attention given and instead rushed into dehumanising the vehicle. “Over the past 30 years, the auto industry has worked to take the driver out of the object he or she could love, to make the car an object that is convenient to use instead of one for possession and mobility. If you modified your vehicle, repaired it or opened the hood, you ran the risk of losing your warranty. And then car manufacturers are surprised that people no longer like cars! People like objects they can work on, modify, that encourage DIY – here we’re returning to Dominique Boullier’s notion of ‘habiter’.”

Hence autonomous vehicles – driverless – are the logical outcome of this process. “And to compensate, we’re going to use Instagram captology techniques to fix the attention of people inside the car because, when travelling in driverless mode, they still need to be roused from time to time? […] Car manufacturers have got it wrong.” 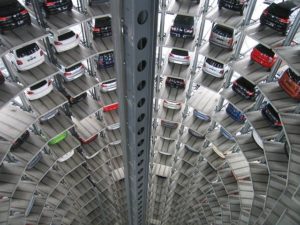 To think “the envelope of the mind like that of the body”, to create a lasting connection, Mr Boullier puts forward three key notions that counter “the piling up of services and applications.”

Firstly, there’s ballasting, anchoring, this opportunity for us to take our points of reference, our sources, with us; to take a little bit of where we’re coming from with us.

Next is filtering. This is about creating an envelope that filters, that provides a view of the outside ‘world’ but isn’t open to all, “in the unbearable mass of networks.” It isn’t a watertight bubble either.

Then comes the notion of ‘living something’, “of an atmosphere that really binds together your body/mind and the envelope,” that makes you feel good inside – feng shui being one such example. “It describes the interaction between the envelope and one’s own emotions, one’s own traditions.”

For Mr Boullier, this work is not the field of expertise of one profession, but of many. We must “work on the links, on the connections between operators – physical or informational. Bind them all together to make ‘inhabiting’ a form of continuity.”

In the field of mobility, working on the habitacle and ‘l’habitèle’ means working on attention and the envelope…. “It represents a considerable innovation task!” he concludes.