Monday 20 September: members of Futura-Mobility continued their discussions on environmental hygiene in transport. Following an initial session in May 2021, on safeguarding environmental hygiene for passengers, for this day in September they invited AIRBUS to present its assessment model for the transmission of coronavirus during a flight, from one country to another. Members from Alstom, Valeo, Keolis, SNCF, Air Liquide, and Groupe ADP gathered around the (virtual) table, together with the Futura-Mobility team.

“Why have we developed this model?” queries Elisabeth Masset, Air Travel Health Assessment Leader at AIRBUS. “To provide a means of making quantitative predictions for the transmission risk of Covid-19 during the whole flight journey – from arrival at the departure terminal up to exiting the destination terminal,” she explains.

To do just this, AIRBUS is relying on ‘aircraft safety’ – one of its main areas of expertise. The AIRBUS methods for limiting risks have been applied to this particular risk, that of a passenger being contaminated, and by extending the sequence – which for AIRBUS usually covers the flight only – to encompass the whole journey from departure airport to arrival airport. “The role of ‘safety’ in this particular context is to avoid a passenger from being contaminated during an end-to-end journey,” explains Ms Masset.

The ‘failure rates’, i.e. cases of failure to protect the passenger, have been estimated for each step of the journey. Two ‘failure’ cases were taken into account: contamination by surfaces (case 1) and contamination by aerosols (case 2). The mathematical model developed calculates the respective probabilities of each of these two failures to estimate the probability of a passenger being contaminated. In theory, the probability of our passenger being contaminated in both ways at the same time should be subtracted from this sum. But to simplify matters, AIRBUS has not subtracted this joint probability. “For the model we’ve always remained conservative, so rather ‘pessimistic’,” points out Elisabeth Masset.

Depending on the protective measures in place during the journey (wearing masks, hydro-alcoholic gel, physical distancing…), AIRBUS estimates the related breakdown rate and so the likelihood of the passenger being eventually contaminated by another, already contaminated passenger.

To do this, every step of the journey is itself broken down into parameters: is there catering on board the plane? Can passengers use the toilets? How many queues during the journey? How many people in contact with another person in each queue, and so forth.

How long each step lasts is an important and configurable part of the model: queueing times (check-in, police, boarding, disembarking, waiting to pick up luggage…), time spent in waiting rooms, the flight time, too. The longer a person remains in a confined space (without aeration) with other contaminated people, the greater the risk of them being contaminated in turn. “The probability of passenger contamination is estimated based on Poisson law simplified by Bernoulli law,” explains the expert.

The propagation speed of Covid is configurable in the model. In a first step, a real-life case of the propagation speed of flu was used (assuming Covid and flu transmit at the same speed). This value, resulting from studies of a case of people enclosed in an aircraft cabin for a certain length of time during a stopover, without air conditioning. “We assume that asymptomatic people are going to sneeze 6 times in 24 hours, according to the studies, but we can modify this parameter to increase it if one variant proves more contagious than another.” The parameters for transmission by aerosols from person to person have been validated because the results calculated by the model for the whole of the passengers’ journey are very close to reality. Indeed, the results were compared with real-life cases.

The model has consequently been developed so its parameters can be modified. “There are 52 parameters in the model, of which around 20 can be directly accessed by the user!” explains Ms Masset.

So the model, based on redundancy step by step, estimates the risk of a passenger slipping through the loop of protection measures in place along their journey.

The epidemiological conditions of the departure and arrival countries are also taken into account, especially the Covid-19 incidence rates, “and are updated in real time,” adds Ms Masset. This information is vital for approximating the risk a contaminated person is on the same trip as the passenger to be protected. To allow for differences in the reliability of this data in the different countries, two parameters are taken into consideration based on studies, in particular from the Robert Koch and Pasteur Institutes in Germany and France respectively, and the Center for Disease Control & Prevention (CDC) in the US: the contamination rate resulting from tests  – “we consider there are 40% more people contaminated in the population than those tested” – and the excess mortality in a country, “knowing that mortality due to Covid lies between 0.5% and 1% of contaminated people, we adopted 0.75% for the model.”

Moreover, through this incidence rate the model directly takes into account the question of variants. “When a variant is more contagious, it will become apparent in the incidence rate of the country concerned,” she clarifies.

Measures introduced by governments can also be configured: type of test introduced (PCR, lateral flow), number of days before travelling (three days, the day before), quarantine or not? How long does quarantine last?

So the aim of the approach is for “each country, which would establish an acceptable level of risk, to be able to test out different measures in the model to see, depending on the destination country, whether for them the result is acceptable or not.”

Besides, the results of the model were validated when compared with real-life cases. “This became extremely clear in the case of Iceland, which is particularly transparent about its epidemiological data. We could predict the results [development of the incidence rate in the country] after each of the measures introduced!” points out Ms Masset.

Stepping up measures to protect against Covid-19

The model allows testing of the effectiveness of the different measures, in a given context with the different epidemiological situations of the departure and arrival countries. Moreover, to gain maximum benefit from this impressive work, the model, now developed on a dedicated AIRBUS server, will shortly be hosted on a platform open to every health ministry of every country.

On the ground, the legitimacy of traditional measures (masks, gel, distancing) is hereby borne out, as is the recommendation to be able to test passengers during the journey.

In flight, the specific circuit of conditioned air, from above downwards, filtered and renewed every two to three minutes, is extremely effective against cross-contamination. “Its efficiency is equivalent to social distancing, it’s been proven in studies by AIRBUS,” comments Ms Masset.

Yet AIRBUS is keen to take this even further by “testing  [at microbiological level] the air flow that is  filtered or the air in the cabin”, explains Nicolas Bardou, head of the Onboard Health project and advisor for safety crisis communications at AIRBUS.  One of the biggest barriers to working on the topic is the lack of regulations or standards defining what constitutes satisfactory air quality. “Even if we managed to assess the number of coronavirus molecules in the air, nobody today knows what a satisfactory ratio is!” he complains. The other mobility industry stakeholders all agree about this pitfall.

Time is of the essence when it comes to contamination. “The aim is, for instance, to reduce waiting times when queuing,” says Elisabeth Masset, taking, by way of example, the trial whereby passengers board the plane six rows by six, or, for disembarking, putting illuminated signs in the cabin to let passengers know when it’s their turn to leave the plane. “AIRBUS is working on these aspects with air companies, which, in addition, have to manage these flows fast.”

Nicolas Bardou points out how the aircraft manufacturer is also working more generally on solutions to tackle pandemics that might occur in the future, to detect passengers during travel, or on developing contactless. “For Covid, limiting contact with surfaces may not be the most important thing, but it might well be the case for other diseases.”

Moreover the model could come into play.  “We have worked on Covid-19 but this model could very well be adapted to other diseases,” sums up Ms Masset.

To gather information, Vincent Feuillie from Air France looks to Ebola and approaches to tackling this particular virus as an example:  “given its extremely high comorbidity and mortality rates, everything is done to quickly isolate anyone has been in contact with the disease. It’s a good example of how to fight a contagious disease.”

Ongoing research, adaptable to other modes of transport

Going forward, AIRBUS is keen to continue validating the hypotheses with epidemiologists. Especially, “the impact of vaccination on the number of people who are asymptomatic, contagious, or not, remains to be explored,”  reflects Elisabeth Masset, on this 20 September 2021.

With regards adapting the model to other modes of transport, Elisabeth Masset is very clear: “regardless of whether you are in a car, on a train, or in a plane, at the end of the day it’s the same logic, depending on the incident rates at departure and arrival, on the protective measures in place during travel, on the specific steps of the journey… we can adapt the model.” Plenty of work lies ahead!

To dig deeper into the model, follow the links below to the conference by Elisabeth Masset, for IATA in June 2021: 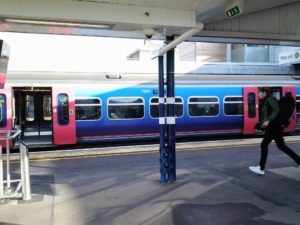 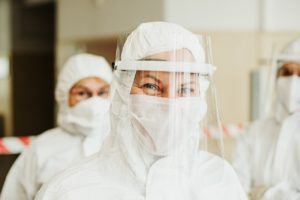