Milos is a ride-hail driver with Uberbattery.

Jim, his client, discovers the vehicle uses a necrobattery charged from the bioradiation of the driver’s mother.

“Cool car,” said Jim five minutes into the ride. Given all the concepts ride-hail drivers are coming up with to stand out from the competition, I expect the worst. Clients have become guinea pigs used by nerds out win the jackpot. This morning the app offered me Handsoncar. I clicked without paying attention. When I got in the car, a robot undid my shoes and started giving me a pedicure.”

“Once I clicked on Tafhee. A nightmare!”

“Yes, I know it. They go for as long as possible on two wheels. It’s not for the faint hearted.”

As luck would have it, Jim is faint hearted. He was so scared he passed out. His girlfriend laughed at him. He didn’t like that. He got angry. She dumped him.

“On the other hand, I love Carecar. Massage cushions, Zen music, soft lights. They offer a totally relaxing ride.”

As luck would have it, because of his separation Jim’s finances are at rock bottom. Since the fares of ride-hail drivers are based on supply and demand, he can no longer afford Carecar.

“No, let me guess. It’s, once the car arrives, once it doesn’t…. No, it’s a car that does all kinds of things with its customers. In five minutes, I’m going to share the car with twenty people…. Alright, the cat’s got my tongue.”

Equipped with a semantic decoder, the catbot purring on the seat next to Milos sends the customer hearts to thank them when the cat gets their tongue. But Milos looks solemn. He’s not so keen on talking about the Uberbattery concept.

“Our cars work with a necrobattery. Do you know?”

Jim nods. The necrobattery charges up with biogas when a body decomposes in a bioreactor. When alive, the person decides how they want their battery to be used after death.

“My ex had a necrobattery her father gave her. This monster chose it to power her electric shaver. That’s what you call a loaded legacy! And the worst bit is that she didn’t want us to throw it away. She reckoned it would be like killing a dead man.”

“Don’t be the living dead, drive with your dead ones. Become an Uberbattery driver.”

Jim smiles when he hears this commercial break in the car. Milos doesn’t. Having listened to it so many times, he can’t stand it anymore.

“Who’s Sophie?” asks Jim, seeing a message on the passenger tablet that reads: “This vehicle operates thanks to the generosity of Sophie.”

“You mean your mum programmed her necrobattery to power your car?”

“I was definitely surprised. I was sure she had opted for collaborative powering of the mega CO2 vacuum cleaner; climate disasters terrified her. Or, for supplying a school in Africa; she believed that education was the way to save the planet.”

“Sounds like she was a nice person, your mum. Yet she gave you a poisoned chalice?”

Milos shakes his head. The catbot copies him. Sometimes he wonders if his mother was really a good person. Hell is paved with good intentions, this necrobattery is a nightmare. Because of it, his progenitor is systematically the topic of conversations with clients. She could have thought twice before imposing her presence on his life every day and preventing him from moving on. After all, keeping a low profile is the very least a dead person can do to ease their relatives’ grief.

“Why poisoned? Without my mother’s necrobattery I would be, like my friends: jobless, homeless.”

“But you would be able to go through the grieving process.”

“When your mother’s dead, she stays in your head. There are so many shared memories.”

“True. Deep down in, each of us has a little cemetery with the graves of their lost loved ones.”

“Yes, that’s it. It’s just I have a cemetery on wheels,” says Milos.

“Except that, like rolling stones gather no moss, no flowers grow in your cemetery. With Uberbattery, your suffering remains raw.”

“Are you a shrink or an annuitant?”

“You’ve got time on your hands to think about things that don’t matter,” says Milos.

Even though Milos thinks his client is pushing it a bit with his cemetery in the body, he agrees with him. He isn’t allowed to tell him that. Under the terms of the Uberbattery contract he is not allowed to criticise the scheme. The instructions are clear. They specify that death is everyone’s greatest fear. Consequently, the necrobattery will raise a great many questions from customers. You have to accept this responsibility. Death must even be put into perspective with stock phrases such as: “Studies show that if you eat healthy, do your 10,000 steps every day and avoid drugs and alcohol, you will have a 100% chance of dying one day!”

“The necrobattery is the best present my mother ever gave me. With it, it’s like she birthed me twice over.”

Now this is the part of the argument Milos hates. It’s silly, stupid, but the algorithms say these stock phrases increase customer loyalty to the concept.

“A strange present. We’re living in a society where people increasingly take orders from robots, from algorithms, from data. We take a step forward by becoming machines after we die.”

This client is really starting to get on Milos’ nerves, but he’s not allowed to interrupt a discussion about the necrobattery. Since the conversations are analysed and decoded, he risks a drop in his percentage of each ride. On the other hand, he can steer it.

“For customers, the necrobattery is a godsend. Because the energy is free, the cost of the ride is much cheaper.”

This economic argument makes Jim feel uncomfortable. Saving money on the back of a dead woman seems inappropriate, even obscene. During World War II, they made soap out of the dead. Most likely, he would have felt the same if he had been forced to wash with it.

“And you, how do you want your future necrobattery to be used?” asks Jim.

Milos carefully rereads Uberbattery’s guidelines. No mention of how to answer this question.

“I’m going give my body to the earth. Too bad for my wife and children, but I prefer to be dead for a lifetime together with my catbot.

The catbot purrs. So does Jim. Listening to Milos, he has just decided to make a will stating that he does not want his loved ones to make him immortal by turning him into a necrobattery. To end up in a car listening to customers talk about their existential angst isn’t really a death! 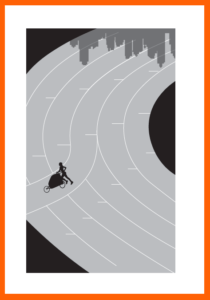 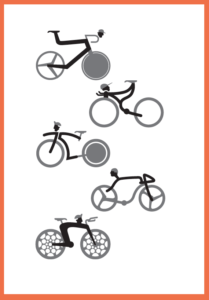 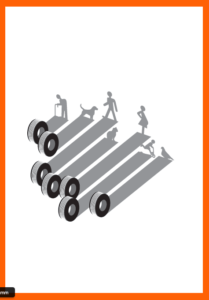