On 14 December 2018, Futura-Mobility welcomed André Loesekrug-Pietri, former special adviser to the Minister of the Armed Forces, founder of A. CAPITAL, and spokesperson for JEDI, the ‘Joint European Disruptive Initiative’.

“Europe is losing the technology war. Its values, and even democracy, are in jeopardy,” he warns. 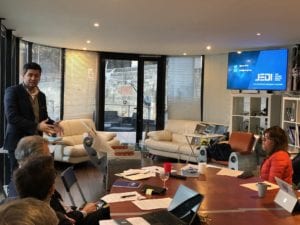 Europe must find its place in the tech war

Mr Loesekrug-Pietri describes Europe’s position, extremely alarming, in the face of unprecedented technological progress. Technologies such as artificial intelligence (AI) and blockchain, realities today, are impacting all sectors and are developing fast. Yet in many fields, “Europe remains a digital colony of American and Chinese powers,” explains Mr Loesekrug-Pietri in his article Zuck, Europe & VivaTech – le syndrome de Stockholm ?  He is convinced that unless Europe takes action to become a tech leader, the GAFAM* or BATX** will impose the technologies on Europe.

The figures prove that Europe has yet to position itself:

Big private businesses like the GAFAM are not afraid to invest money and time in projects that may not prove successful. “They burn money in trying,” remarks Mr Loesekrug-Pietri. This is why he believes de-risking projects is a must – to be able to develop and test prototypes, and ascertain their benefits, before they are taken up by companies or investment funds.

But financial matters are not the only issue. “We must also stop doing incremental innovation and focus efforts on disruptive innovation,” says Mr Loesekrug-Pietri. Over 60 years, the American Defense Advanced Research Projects Agency (DARPA) has invested just $60 billion compared to $85 billion by Europe over six years… and has given rise to the Internet, the GPS positioning system, drones and SIRI.

In today’s tech world, once a leader is established it occupies a dominant position in the whole market. As Mr Loesekrug-Pietri puts it, “the winner takes it all.” Hence survival in this war depends on speed and disruption.

To meet this fundamental challenge, Mr Loesekrug-Pietri has explored the DARPA model to understand its success factors. The Agency funds major challenges which, using a special methodology, puts big businesses, start-ups, and research centres on an equal footing. It assesses the projects arising from these challenges, based on criteria such as speed of implementation, the odds they may soon fail, and opportunities for crossing frontiers.

Thus in 2018 Mr Loesekrug-Pietri, together with other big names, launched the JEDI initiative, describing it as “an agile European tool designed to fund and support innovation, in order to obtain breakthrough innovations that lead to changing business models.”

Comprising 150 members, mainly directors of tech firms (start-ups and big groups) as well as researchers, JEDI brings together people working on innovation from both the public and private sectors. Big groups, start-ups, SMEs, and research institutes are joining forces to build technology blocks.

In order to prove the effectiveness of the system and convince stakeholders, speed is of the essence for the JEDI. Hence waiting for the 26 European Union (EU) Member States to join before taking action is out of the question. “The club is open to all Europeans, but we are start with those already on board,” explains Mr Loesekrug-Pietri. The initiative is therefore kicking off with France and Germany. Eastern European countries are also extremely interested in this impetus.

Like DARPA, JEDI has created its own methodology, adapted to Europe, with:

JEDI has set itself four main missions, namely: climate change, health, the human-centric digital transition, and new frontiers. For each one, the aim is to launch a challenge and select a limited number of rapid and disruptive projects, for which JEDI will subsequently provide financial support (between €15 million and €20 million.) In addition, coaches or ‘Programme Managers’ will accompany each project. Fifteen in total, these charismatic experts, seconded from their companies for four years, have the necessary experience to avoid getting involved into the operational side and to remain neutral. The main idea is to quickly reach the prototype phase and test it, and above all to be the first to market.

To meet these challenges JEDI organises ‘MoonShot Days’, otherwise known as ‘idea factories’. Once a month, one of the members of the association, a tech expert or person with other interdisciplinary skills, like sci-fi for instance, gives a 45-minute a talk on a major issue related to his expertise. These presentations are an opportunity for generating new ideas and identifying new challenges.

In March 2019, jointly organised with Futura-Mobility, one of these meetings will be held on ‘mobility of the future’.