18 December, 2018: a short and intense morning conference organised by the Veolia Institute, at its offices in Aubervilliers (Paris suburbs), on the topic of resilient cities. 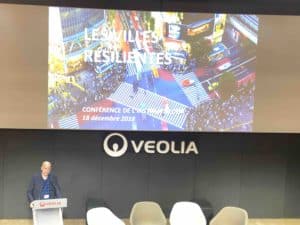 The increase in urbanisation across the planet, coupled with climate change, does not augur well for tomorrow’s urban dwellers. “Three billion extra urban dwellers by 2050. We talk about metropolisation but should really be talking about the growth of slums/shanty towns (bidonvillisation)!” suggests Nicolas Renard. With 90% of cities located in coastal areas and an inequality rate two to three times higher than in rural areas, city resilience is a crucial issue.

Cities face a multitude of risks. “They are ‘brutal’ risks like natural catastrophes, more pervasive social divide risks linked to impoverishment and migration, or health risks – heightened by the increased mobility of people – or further still, technological risks,” pointed out Nicolas Renard.

Major crises demonstrate just how real these risks are. Hurricane Katrina in New Orleans and the nuclear disaster in Fukushima caused by a tsunami have transformed the areas they struck. “A so-called ‘natural’ catastrophe is when a natural phenomenon encounters a vulnerable population,” explains Mr Renard. In Europe, every year 5% of the population is affected by a natural catastrophe. Vietnam loses 1.5% of its GDP every year due to different crises.

David Ménascé points how how the notion of resilience derives from materials science: “it’s the capacity of a material to withstand an impact.” It was subsequently used in the field of psychology as “the capacity of an individual to recover from a trauma.”  The concept was eventually broadened to describe the ability of an ecosystem to survive a crisis.

In the face of these ever-increasing risks, Nicolas Renard notes how cities are rediscovering their vulnerability:“we are less accustomed, so at a greater disadvantage.”

For David Ménascé, our attitudes to risk have evolved over the years. Following the Lisbon earthquake of 1755, thinkers of the Enlightenment anchored the belief that science and technologies would provide coping mechanisms for natural risks. This is the notion of ‘progress’.

In the 1970s emerged the precautionary principle, which acknowledged that technology, not just nature, may also entail risks. “So we thought it was possible to manage risks and render them harmless by applying this principle.” As for the notion of resilience, it introduces a certain  fatalism. “We prepare for the inevitable,” remarks David Ménascé.

The major challenge for cities is protecting people, especially the most vulnerable, and preserving heritage. “The irony is that when a resilience strategy works nobody notices it because nothing happens! This undoubtedly explains the difficulties encountered when seeking funding for such strategies,” points out Nicolas Renard.

So what is the most effective approach? “When it comes to resilience, you can’t act alone”: for multiple risks you need forecasting and multiple solutions, according to Nicolas Renard. Some cities wilt and die after an impact; others, age-old, appear to have withstood everything that has come their way; others rise from the ashes. New Orleans and Detroit have become open air labs.

Insight from the speakers above further enriched the debate, especially with regards the right dimension for working on resilience and dialogue between citizen resiliency and public policy.

Judging from the speakers’ input, the scale of the territory, of the metropolis in particular – rather than the inner city – seems the best angle of approach. “Resilience is first and foremost an urban issue, and as such is far less a national concern,” according to David Ménascé. Indeed moves by cities to take the lead on social and environmental matters appear to prove his point. Around 100 cities worldwide have appointed ‘chief resilience officers’. In Paris, for instance, the areas taken into account extend far beyond the suburbs to include rural communities.

A reaction from the audience: “the concept of resilience applies equally well to rural settings, with their own difficulties and crises!” said Edith Heurgon, director of Cerisy International Cultural Centre.

Guillaume Josse, urban planner and director at Groupe 8, a multidisciplinary consultancy specialising in municipal and urban development in Southern hemisphere countries, takes Kinshasa, capital of the Democratic Republic of the Congo (DRC) and the third biggest city in Africa, as an example. “Its population is doubling every 15 years. This city is home to around 500,000 extra inhabitants every year!”

Kinshasa is extremely vulnerable to climate change, especially flooding, which renders its roads impassable – isolating entire neighbourhoods – and makes life difficult for infrastructure construction: “we’re playing a game of catch-up that can’t be won!” In these circumstances, the urban planner queries the building of long-term public policy, given the staggering quantity and urgency of needs. “Cities need to be designed as systems, not in silos, which is usually the case. It’s complicated.”

For Guillaume Josse, “cities in the Southern hemisphere have low resilience because they are sparsely equipped… yet they still live on, even if in theory it seems impossible. The endurance of cities in the South is down to the resilience capacity of their inhabitants. If you lack resiliency, you die.” David Ménascé also highlights the support that emerges between citizens when having to cope with shock situations. Support that is further intensified today through social media.

According to Guillaume Josse, “the most interesting initiatives arise when public policy meets local neighbourhood initiatives.” Moreover, Edith Heurgon turns the question on its head to ask: “how to shift from citizen engagement to public policy?”

In Roubaix, La Condition Publique, a cultural organisation located in the heart of an underpriviledged district, has perhaps found an approach that works. Its mission is to “make residents want to take action and give them the means of doing so.” In this industrial city on the decline, where 46% of its population lives below the poverty line, mobilising communities is an ongoing challenge.

“La Condition Publique is one big house share. We are constantly increasing the activites on offer to attract people to this shared space,” explains director Jean-Christophe Levassor. Hence the organisation offers a mix of activities ranging from every type of concert and fab labs designed to encourage  inhabitants to take up DIY, to one-off events in derelict urban areas and street art on the walls of abandoned buildings. To make people want to invest their time and energy, “it’s important to tell them a story, to get them involved in their district again,” concluded Jean-Christophe Levassor.

To find out more, read the Resilient Cities issue of Facts, published by the Veolia Institute