Paris, 29 August: during this breakfast meeting organised by the Ecosys Group, speakers representing road, rail, air, and maritime transport in France discussed the challenges and opportunities their sectors face in the shift towards carbon-free mobility.

According to Jean-Jacques Thomas, innovation & digital director, SNCF Réseau (French rail infrastructure manager), SNCF started taking steps to decarbonise its activities relatively late in the day, compared to other transport segments. “Initially at SNCF, the subject of decarbonisation was not seen as a priority since rail in France already performs extremely well on this score,” he said. “But today we are aware that there may come a day when it isn’t so far ahead.”

“Aviation has been on the pathway to decarbonisation for a long time,” said Thierry Rouge-Carrassat, innovation director, Safran. “There is general awareness now, even though the subject is nothing new.” As part of its efforts in this direction, the industry has set itself targets like achieving neutral growth from 2021, as per the ‘Corsia’ (Carbon Offsetting and Reduction Scheme for International Aviation) plan, and halving emissions by 2050 compared to those of 2005.

Given the long service lives of vessels – from 50 to 70 years – maritime transport is facing the same renewal issue as aviation. A further complication, ships may well change hands several times over these many decades. Yet since two hundred of the world’s largest container ships at sea produce the same amount of sulphur as all the world’s cars, according to a 2018 study led by James Corbett, taking action is crucial. “To innovate, solutions that can be added on during the service life are being explored,” said Gaëlle Rousseau, eco-design manager, Naval Group.

Meanwhile in the car industry, today’s changing paradigm means not one carbon-free technology or solution dominates, as was the case for diesel in its day. “Instead it’s a question of finding the best technologies/solutions, which are wide ranging and must be adapted to local contexts,” said Philippe Watteau, managing director, Vedecom. 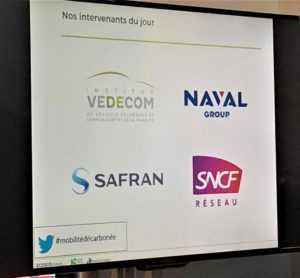 The panellists then discussed which innovations they believe hold most promise for their sectors in the future. Three areas in particular – alternative energies, eco-design, and optimisation – stood out.

“Air traffic for distances under 1,000km represents 50% of flights and 20% of emissions. With hybrid technology, we could take off planes using electric motors then switch to combustion during cruise flight,” said Mr Rouge-Carrassat. This approach, he explained, would reduce noise and air pollution levels around airports, plus when cruising, biofuel could help shrink the carbon footprint of the journey by jet fuel.

In rail, hybrid and hydrogen trains are coming into play. To date, 20% of rail traffic in France runs on diesel, mainly in urban zones and just half of the country’s 30,000km network is electrified. In August 2019, SNCF announced plans to order 15 Coradia iLint hydrogen trains from Alstom and introduce hybrid regional trains within the next few years.

Shipping is also considering hydrogen and hybrid engines (diesel-electric or even using aircraft turbines). The challenge for this sector, in particular, is that 70% of the energy consumed by a ship is linked to its propulsion system, yet it is proving difficult to further improve their performance.

In shipping, eco-design means considering the whole life cycle of ships to limit their negative impacts on the environment. As part of this approach, the Naval Group is currently focusing on pollution by plastics, by NOx and Sox particles, and management of ballast water to avoid biological contamination from place to place across the globe.

French Railways faces a dilemma – how to boost rail capacity in dense zones where building more infrastructure is complicated, costly, or simply impossible? One solution is to use cutting edge technologies to increase traffic on a given section of track. This is the case for the Eole project in Paris, which is extending a busy commuter rail line 55km westward.

“Thanks to new automated CBTC [Communication-Based Train Control] system called NExTEO, installed on the central section of the [Eole] line, it will be possible to run trains at 120km/hr every three seconds!” said Mr Thomas.

To advance research and solutions before they come to market and competition kicks in, Vedecom is exploring precompetitive issues together with competitors. The Institute is also working with suppliers and infrastructure managers, “which is vital because, at the end of the day, there’s nothing more dependent than an autonomous vehicle,” said Mr Watteau.

Direct partnerships between two or more manufacturers are another possibility. Safran and Valeo, for instance, have partnered to adapt autonomy and artificial intelligence (AI) from the auto industry for the air industry, and vice versa. “There are so many avenues,” added Mr Rouge-Carrassat. “To understand and explore future solutions, Safran is also drawing on institutes and think tanks like Futura-Mobility.”