16 February 2018: the central topic of this Futura-Mobility session, held at the offices of the European Parliament in Paris, was ‘strategic disruption to come for the mobility industry’.

Digital and the State – presentation by Henri Verdier

“At a moment in time, the State wasplaying a leading role in new technologies. The first data centres in France were instigated by INSEE [French National Institute of Statistics and Economic Studies], whose line of thinking in the 1970s pretty much prefigured the big data approach.”

Henri Verdier, interministerial director of digital and head of data in the prime minister’s office, presented a broad outline of the État plateforme, the national digital strategy designed to facilitate and simplify exchanges between the authorities and users (the public) through secure interfaces (application programming interface, API) controlled by users.

“If I had to sum up what I do in a Tweet, I’d say it’s building the Etat-plateforme in terms of system architecture,” he explained. “Behind this are plenty more ideas: it must be possible to expose everything we do to the outside world and feed the French economy with state resources.”

From the State’s point of view this remains a problem. So every time we can support digital resources in common that at least don’t benefit a single entity, we will have done some good. I’m not saying this is enough to sort out this issue, but on an everyday level I suggest you use OpenStreetMap [data by and for the people] as much as possible instead of Google Maps!”

In fact, the presence of other services is a way of countering the domineering influence of the GAFA. With this idea in mind – “by forcing a kind of coalition between La Poste [French post office], the French National Institute of Geographic and Forest Information [Institut national de l’information géographique et forestière, IGN] and OpenStreetMaps” – Mr Verdier and his team have built up a database of addresses with accurate georeferencing for every postal address in mainland France.

His work also entails pushing within government for the creation of small, ultra-agile teams that resolve situations per the slogan – ‘Whatever the project, we can achieve a ‘minimum viable product’ in six months for less than 200,000 euros’ – “and I’ve already done it at least 50 times with a programme involving intrapreneurs and agile developers,” adds Mr Verdier.

“For the State, this is really crucial,” he expands, “because all the same we had this speciality – even if the private sector does too – of accumulating major projects lasting six years and costing around 300 million euros; until, that is, we realised they weren’t exactly what is needed.”

“It is difficult to think about digital transformation in its radical forms: for instance, what’s the meaning of safety when everyone is flying drones all at the same time?

« I’m also fighting a cultural battle […] there is more intelligence outside than in. Monopolies linked to capital, computing power, or the number of engineers are a thing of the past.

“We’ve all been programmed about data being rare, expensive to produce and store. Broadly speaking, we are heading for virtually free data. It represents a dramatic change. This has quite straightforward consequences: in any case, playing the open innovation card, since it’s impossible to know who is preparing the next disruption. At the end of the day, the platforms always win: if you are the boss of a powerful innovation ecosystem, you are only stronger if you’ve created a product dependent on an innovation system.”

“As for mobility, if we can’t organise transport using our data, it will be organised with data from others. We must organise our future with our resources; but not seek to contain and monetise too quickly.”

By way of example, he referred to Google, where it is not allowed to seek a business model under at least 100,000 users. The only focus: create value for the user.

Karima Delli, a member of the European Parliament (MEP), set out her position on the many issues raised by the ‘strategic disruption to come for the mobility industry’.

Ms Delli reasserted what she considers will be the most important mobility topics in Europe tomorrow: low carbon mobility, safe mobility, connected mobility.

“COP21 overlooked the transport sector and I regret this. At Le Bourget [international air show] I saw the efforts being made by aviation,” she said.  A new objective to incorporate renewable energies was recently set at the European level, “for transport it’s 12%, but right now we’re at 1%.”  Ms Delli also pointed out that with 80% of the world’s population expected to be living in cities by 2050, “goods transport will be a critical issue”, which includes managing air space (drones).

To tackle these challenges, the European Parliament is workin on future legislation for vehicles and CO2 emissions. “Between ourselves in Europe, it’s already a challenge coming to an agreement on any given objective – banning combustion engine cars in France by 2040, in Norway by 2030, in Finland by 2025.”

Ms Delli believes European industry must avoid the solar panel syndrome and stay in the electric car race, including for recycling, with tensions over rare earth metals on the horizon.

Regarding the ‘Airbus des batteries’, the European Commission’s idea that European manufacturers should join forces to produce their own batteries, in order to avoid falling out of the running with China and the US – “for my part, I don’t believe in the competitiveness of such an initiative,” she asserted.

Indeed, an autonomous vehicle system needs a lot of data to process any given situation – here Ms Delli took the example of negotiating a puddle, which would require “320 million pieces of data”. Also, this data “requires interceptors, which consume vast amounts of energy.”

To address all these questions, “from June 2018, we will launch European sessions (assises européennes) to debate the transformation of the automotive industry, because through this industry “we have to reinvent the city”.

Discussion groups and sharing in plenary

Divided into three work groups, participants discussed the session topic – ‘strategic disruption to come for the mobility industry’ – then shared their points raised with everyone present: how must companies adapt to a society where everything is a service, to digitalisation, to the challenges of sustainable development, to competition from China and emerging markets in Asia and Africa. How to plan their company for 2050?  What are the challenges?

The main disruption topics identified by the groups are as follows:

This concept involves both usage and governance. It can be assumed that people are increasingly shifting towards choosing their mobility, especially given the trend of greater work freedom. Will mobility be physical transport or instead mobility via telephony and virtual or augmented reality?

Even more than today, high-capacity transport will coexist with ‘new mobility’ (ride hailing, cycling, car sharing) in order to reduce the urban footprint of mobility infrastructure. There is a link between housing in cities, changes to family structures, and mobility. 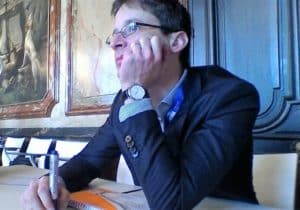 “What about governance between inhabitants, the city, and platforms?” asked Arnaud Julien, innovation and digital direct at Keolis. “Are the people going to take back control, particularly given the emergence of technologies like blockchain, and where does the city stand?”

Is MaaS the le royaume des plateformes ? The question of business models, especially those of transport manufacturers and operators, se pose crûment compared to these governance matters. In 2050, issues over data management will be either totally resolved or still at the centre of discussions!

Journeys of the Future – Introducing Mobility as a Service

Today MaaS is very much focused on the suburbs as part of a ‘public transport’ mindset. The challenge for MaaS tomorrow will be that it concerns all transport modes and all territories. It will be up to future vehicles to adapt to mobility rather than mobility adapting to the vehicles available.

The platforms (Google, Uber?) are the entities that are going to be able to provide a global response to clients’ needs – by integrating information from the whole chain upstream downstream. The risk being that the links in this chain may become commodities and the value preempted by the platforms.

In 2050, the only actors left standing will be those that are data driven; the other will be history. With data, the whole value chain is disrupted: the business model for mobility systems and consequently the roles of the different actors.

The evolution of skills is a major challenge linked to the issue of data challenge. Industries must transform the foundations of their expertise: shift from mechanics to data science… yet without forgetting mechanics altogether since mobility still also involves mechanical objects.  But given it takes time to set up training – how to plan ahead?

This disruption in the value chain is also an opportunity for industry actors – giving them a chance to optimise and differentiate products depending on the user case.

For instance, is the Airbus A320 best suited for a Paris-Toulouse shuttle flight?

This optimisation drive will depend on generating comparative data on the different mobility solutions, depending on customers’ needs and usage. New actors, like Hyperloop, must be included in these comparisons.

It is difficult today to imagine the energies of tomorrow. It is a leap in the dark. Nevertheless, the options should be considered as of now. We must not pin all our hopes on batteries.

Mining – underground, urban (recycling), or in space (the Moon, Mars?) – will be a major issue in the years to come. Whether for the rare earth metals in electric vehicles, storage systems or renewable energies, this tension over resources is significant. It is set to disrupt geopolitical equilibrium in certain parts of the world and affect corporate strategies for systems that are ‘sustainable, inclusive, and for the common good’.

How will the dominant Western modern evolve in relation to African demographics and China’s domination of the global economy? Is is still relevant or not in these new markets? Opportunity or threat?

China’s Silk Road Economic Belt Initiative proposes a land-based solution for long-distance transport, while the population boom in African is surely an opportunity for new modes in the skies.

By 2050, it is highly likely China will dominate technologies and practices. Already today we are seeing how the Chinese are capable of deploying solutions on a massive scale – cf. free floating bike sharing – even if they are at times disappointed with the results. For French and Europen industries, another kind of economic intelligence needs to be launched.

– uptake of autonomous vehicles: in Africa are we going to see a leapfrogging effect resulting in every vehicle being autonomous, or will different types co-exist? In our countries, the general belief is that most vehicles will be autonomous

“Planes and trains have already been communicating with infrastructure for a long time,” said Jean-Jacques Thomas, innovation director at SNCF Réseau and president, Futura-Mobility. “For the automotive industry, the big challenge is making this communication (in terms of data) and connection (energy) between the vehicles and their infrastructure.”