Paris, 3 July 2019: co-organised by Futura-Mobility and French Mobility (France Mobilités), the theme of this meeting was ‘Mobility and Territories’. Around 30 participants attended, including two members of the French Parliament – Damien Pichereau and Jean-Luc Fugit.

Part 1: Attitudes and approaches to mobility – the need for change

Carlos Moreno, co-founder and director, Chaire Entrepreneuriat Territoire et Innovation, Paris 1 Panthéon Sorbonne – IAE, insisted on the importance of being able to choose our mobility, instead of having to put up with it. He is also keen on the idea of promoting the positives of immobility as opposed to mobility and on reconsidering the need to travel. “We must better understand the environmental, economic and social forces driving mobility. What are the objectives of this mobility?” 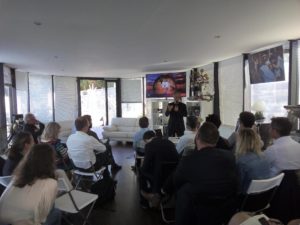 A 2017 survey by the observatory ObSoCo and Chronos reveals that 48% of French people would like to live elsewhere if they had the chance. This desire is particularly strong among those living in large urban centres. Furthermore, 60% of the French feel they have to put up with their transport means.

Figures like these reveal feelings of unease with cities. People feel obliged to travel for work and their everyday needs. They want a different kind of urban life.

Thinking mobility in silos, i.e. different policies and priorities for cities, for the suburbs, and for rural areas has created an increasingly obvious disconnect, and growing discontent in France.

Since 1999, the Spanish city of Pontevedra has banned all but ‘essential’ cars from its centre. In 2014 Oslo decided to take steps like replacing parking spots with bike lanes, vegetation, and benches to get rid of the individual car. Moves like these are examples of such silo-thinking. Actions are taken with the city in mind, but not its surrounding agglomeration. “We’re turning a blind eye to the issue of territorial continuity,” warned Bruno Marzloff, sociologist and founder of Chronos and Lab OuiShare x Chronos.

Indeed, mobility ideally needs to be planned as part of a connected network and so ensure territorial continuity, i.e. being able to travel from point A to point B in a region, ensuring seamless flow between the two, making regions easier and nicer places for living and working.

According to Mr Pichereau, “In France, it’s the role of the Regions to ensure territorial continuity”. But for Mr Fugit, “it’s not easy, because we have to prove that cleaner mobility is accessible to all. When you are young and living in a rural part of France today, you have no choice but to buy a second-hand combustion-engine car.”

Both Mr Moreno and Mr Marzloff believe the Fordist model of development is no longer relevant to mobility. The former suggested we reconsider our consumption behaviour and the role of the car in our lives. “We can no longer afford to please lobbies, to indulge the paradise of mass consumption epitomised by Fordism, nor accept the mass marketing message that the car equals freedom,” he said. “Single use cars are wreaking havoc.”

Mr Marzloff criticised the current mobility service model, based on demand that is always growing, so dependent on building infrastructure ad infinitum. “One such example is the Grand Paris Express,” he said. “This ongoing project [to build a new, 200km automatic metro system around the French capital] will facilitate and thus increase travel, resulting in a headlong rush ahead that will distance housing even further from the city.

“It’s crucial we break away from this thinking based on infrastructure and motorised transport. It’s absolutely fatal!” he protested “We must focus instead on proximity-based towns and cities.”

Bearing in mind the issues and imperatives raised above, one way forward for tomorrow’s mobility, suggested Mr Moreno, is to think in terms of changing the issue instead of the remedy, with a focus on:

To reinvent urban and territorial life, Mr Moreno has developed a concept baptised ‘chrono-urbanism’. It is based on urban modelling, on the use of tools like blockchain and data. He explained how the resulting ville d’1/4 d’heure (the ‘15-minute town or city’) should ensure urban populations have access within 15 minutes, and people living in rural areas within 30 minutes, to all their essential living needs, to what makes them happy. Namely: accommodation, work, food, healthcare, education, and leisure. “We have lost essential territorial links like the community life of neighbourhoods and local ties. Nobody knows anybody anymore,” added Mr Moreno.

In this context, Mr Marzloff pointed out that after World War II there were 600,000 bars in France. Today there are just 30,000. This decline in social gathering spots is surely another factor contributing to this feeling of frustration among the urban population of France.

He also suggested creating hubs acting as convergence and distribution points. The idea being that they could help better manage transport and reduce energy consumption, as well as providing places to live. Damien Pichereau agreed on this point: “cities are taking urban logistics into account. Projects are emerging to avoid trucks entering centres fully loaded and leaving empty.”

This is the goal behind the manifesto for Mobility Hubs, launched by La Fabrique des Mobilités, which seeks to encourage the development of commons in order to ‘reduce motorised journeys, encourage chosen mobility, meet environmental demands, and boost accessibility to public services and activites for inhabitants and visitors’.

Part 2: In the field

To provide first-hand experience of this link between mobility and territory, Futura-Mobility invited several start-ups to explain their innovations and actions for  greener and more user-friendly mobility. David Caubel, cross-functional project manager for innovation and territories, French Mobility, chaired this roundtable.

Flying Whales is looking to develop cargo transport by airship. “The original idea was to meet the needs of the ONF [French National Forests Office], which is unable to access all its sites to collect wood,” explained Romain Schalck, marketing director, Flying Whales.  The 150-metre-long airship can reach such land-locked sites, remain in stationary flight during loading – up to 60 tonnes – and delivers to destination without depending on land transport infrastructure.

Further potential use cases include transporting other types of heavy or bulky materials such as wind turbine blades or rails. This ability to reach areas difficult to access is also likely to be particularly useful for overcoming frozen roads in countries covering vast expanses, like Canada. Indeed, the Government of Québec announced it is taking a minority stake in Flying Whales.

Flying Whales has also signed a partnership agreement with Groupe ADP to design 150 airship bases to be deployed in France and abroad, especially the Americas (from Quebec) and in Asia (from China). The airships themselves will be built in Nouvelle Aquitaine department of France, initial  trials scheduled to take place around Lyon.

Back to earth, in the field of autonomous vehicles (AV), a lot of pilots are going on pretty much everywhere – from Europe to Asia to North America. “But if they’re not coordinated they won’t work,” warned Luc Texier, business development director for autonomous and on-demand mobility, Bestmile. “The only purpose of AVs is to go from point A to point B. They can’t function on their own. It’s technically impossible.” 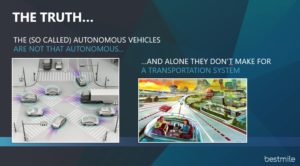 Bestmile has developed a software for coordinating any autonomous or human-driven fleets of vehicles. Mr Texier describes this vehicle-agnostic fleet orchestration platform as a kind of control tower for AVs, a kind of remote intelligence that defines points A and B and how to get there.

“Shifting from a vehicle point of view to a fleet point of view is vital,” he added. “It’s not only a question of taking the driver out of the picture but also reducing the number of vehicles and possibly improving tomorrow’s mobility.”

StreetCo is developing a collaborative pedestrian GPS adapted for people with reduced mobility (PRM). The free app alerts users if there are any obstacles in their path and allows them to find accessible places in their vicinity.

“The first challenge is to grow the community in order to boost the reliability of the journey plans,” said Arthur Alba, co-founder, StreetCo. “We are also working on using artificial intelligence to detect obstacles.”

After a break, in the second part of the conference Véronique Lamblin, director, prospective studies and strategy, Futuribles, explored the rise of electric mobility in our cities, with a focus on  Norway and China.

Norway is the only country that has really adopted electric mobility, which represents 30% of the country’s transport market. Norwegians with an electric car also tend to have a combustion engine vehicle for long journeys. “Yet while the market may have taken off here, it’s important to bear in mind that government is providing strong financial support,” pointed out Ms Lamblin. “Huge state grants are available thanks to revenue from offshore oil and gas. The country is extremely wealthy. Furthermore, 98% of its electricity production comes from renewables, mainly hydropower.”

In China, ‘low-speed electric vehicles’ (LSVE) have emerged spontaneously without any financial incentives. These pint-sized cars are capable of speeds of 40-70 km/h and have a range of 40 to 120km. Typically sold for between US$3,000 to 5,000, they have greatly outpaced sales of standard electric cars – the LSVE market in China currently represents between three to four million vehicles, equivalent to the total number of electric and rechargeable hybrid vehicles in the world!

The popularity of LSVEs in China, up until now, is largely down to the lack of regulation – no special registration, driving licence, or insurance required. However, with the Chinese government now in the process of introducing rules, this honeymoon period is coming to an end. Nevertheless, given the challenges cities worldwide are facing worldwide, i.e. pollution, traffic congestion and lack of space, Ms Lamblin warned of the ‘risk’ these low-speed electric vehicles will continue to gain in popularity in urban areas. In other words, more rather than less cars on the roads and in cities.

To close this session, we were delighted to welcome Zhilin Sim, regional director Europe at the Singapore Economic Development Board, who gave a talk about Singapore. Click here for the summary of his presentation. 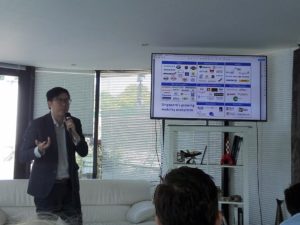